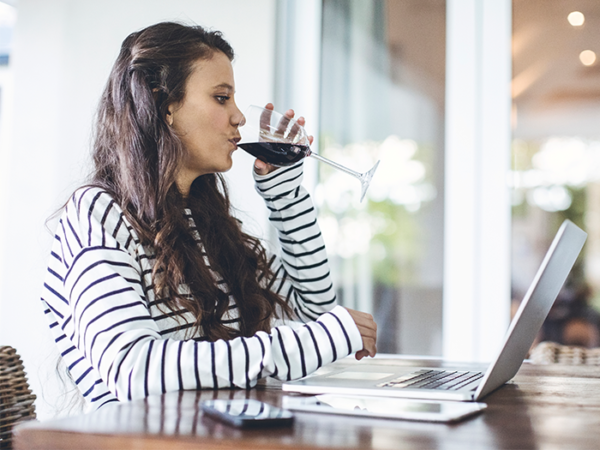 The IWSR identifies six key trends that are growing in significance amidst COVID-19, and analyses their potential for long term disruption

The COVID-19 pandemic has transformed the world over the past few weeks. Global beverage alcohol markets and companies have been subject to massive volatility, including the mass shut-down of the on-trade in many countries and consumer stockpiling through retail and e-commerce.

The picture changes by the day, but amid the disruption, a number of clearly defined trends have emerged and grown in significance. In the short term, the impact of the six trends identified by the IWSR is significant – but will they solidify into longer-term changes in consumer behaviour?

With the on-trade shut down in many major markets and the movement of people severely restricted, ecommerce sales have grown exponentially in the past few weeks.

In mid-March, North America-based online beverage alcohol platform Drizly reported business growing at three-and-a-half times the rate of earlier in 2020, with wine and spirits growing twice as fast as beer.

In the UK, wine merchants have struggled to keep up with spiralling demand: Corney & Barrow reported a 40-50% increase in deliveries at the end of March, while Armit Wines said March had seen its highest turnover in internet sales in over a year, with traffic levels similar to Christmas, but over a more prolonged period.

Among brand owners, the winners are those who have made ecommerce a recent priority.

For instance, Bacardi reports that it has been ‘steadily growing’ its ecommerce operations over the past two years. “Prior to Covid-19, we had been developing B2B relationships with both online liquor stores and grocery retailer apps,” says Lorran Brown Cosby, VP of Digital Commerce at Bacardi North America. “We also put in place systems such as strong search and social capabilities. Because we had these important pillars already in place, we were able to quickly shift our strategy. This segment is now a critical part of our business that is helping us weather the crisis: just these past few weeks, we’ve seen triple-digit ecommerce growth.”

Will the soaring volumes last beyond the current crisis? IWSR CEO, Mark Meek, remarks, “many people will be exploring home delivery services and ecommerce services for the first time during lockdown and social distancing. Consumption habits formed now may stick around in the future, however people who used to go out and shop will likely not switch to ecommerce completely going forward.” He adds, “the pandemic could also accelerate the development of ecommerce in markets where it has been in its infancy until now – for instance, in Balkan countries.”

2- Mainstreamisation: Reverting to the tried and trusted – but what of craft?

Consumers tend to turn to familiar, reassuring brands at times of crisis, as reflected in reports of elevated sales growth in the US for the likes of Jack Daniel’s and Jim Beam in mid-March as the crisis took hold. Trading down is also commonplace as job insecurity escalates and disposable incomes dwindle.

“Big beer companies are getting a lot more shelf space for their major brands because supermarkets are trying to make everything as simple as they can,” reports an investment analyst. “People are also looking for large pack sizes – if you can supply it, you’re going to be successful.”

This has implications for craft beer and spirits operators, who are typically less well-equipped to supply larger formats, and who may fade from the radar of risk-averse retailers and consumers.

“It will likely have a big impact on craft,” remarks IWSR Director, Alastair Smith. “Consumers will be less likely to spend money on a bottle of craft gin when they don’t know if they’ll like it or not. This could lead to quite a shake-out.”

The benefit for craft distilleries – if they can survive in the short term – is that they can sell their stock later. Beer, however, is perishable, adding to the pressure on craft brewers.

“Mainstreamisation is a crisis response; people try to save money in the short and medium term. The long-term shift will largely depend on the economic recovery,” says Smith. For craft, a reversal of the recent fragmentation trend – among both brewers and distillers – could play out as smaller operators struggle to stay in business. This could benefit the larger, more financially secure and flexible craft operators.

3- At-home consumption: The new going out?

In many major markets, there has been a sudden and almost complete switch from out-of-home to at-home consumption as the on-trade has shut down.

Although this is an essentially artificial shift – in that it is driven not by consumer demand, but by external forces – might it encourage people to consume more at home in the longer term, especially given the cost differential as the inevitable economic downturn impacts disposable incomes?

Sales of ready-to-drink cocktails in the US off-premise have been soaring in the past few weeks. Fuelled by online recipes and bartender masterclasses, people are clearly – at least temporarily – recreating their favourite bar in the comfort of their own homes.

Fine wine merchants in the UK report soaring sales of “everyday” wines – in their terms, up to £15-20 per bottle – with most predicting a rapid recovery once lockdown ends and the on-trade opens up again. “Once the crisis is over, we are sure that people will want to celebrate and there will definitely be a surge in parties, eating out, wine dinners, etc,” says Stephen Browett, Chairman of Farr Vintners.

“My sense is that this is short-term,” says the investment analyst. “I can’t imagine that the bars, clubs and pubs will be particularly different from what they are right now. Smaller restaurants and bars might not be able to survive, but it’s not unreasonable to think that their place will be taken by someone else. I think people are now really craving social interaction. If this ends in a few months, August could make for a pretty great summer for the on-trade.”

“Quite clearly there’s a massive switch from the on-trade to at-home consumption, but this will not be a permanent shift for the long term,” says Smith. “It is a forced restriction in many markets and while some consumers may opt to enjoy drinks at home with friends, especially as disposable incomes take a hit, many consumers will continue to enjoy the on-premise atmosphere.”

4- Moderation on the back burner: Where does that leave low and no?

As people adjust to living amidst social distancing and lockdowns, they will largely prioritise comfort, placing issues such as moderation and health & wellness on the back burner, at least in the short term.

“Just a month ago, [consumers] may have been keen to try a new spirit or a low-abv drink at their favourite cocktail bar, but now they’re relying more on tried and true favourites,” says Elizabeth Costa de Rusch, Director of Advocacy at Bacardi North America.

“Consumers are largely holed up at home and, as a result, their behaviours may have shifted temporarily. However, no/low options are here to stay for the long term – especially as consumers look to recalibrate their food and beverage habits, and eat/drink more mindfully,” adds Costa de Rusch.

Bacardi, for example, is still planning to launch its new, premium low-abv flavoured vodka, Plume & Petal, in select US markets on 1 May, followed by a nationwide roll-out from June.

“The shift from moderation is likely to be a temporary hiatus,” remarks Smith. “As social distancing and lockdowns peter out, many consumers will revert back to wanting to drink less but better, and will keep pushing the trend of moderation and wellness. If anything, this crisis will likely only add to the momentum of low- and no- alcohol options in the long term.”

The challenges currently facing the global supply chain for beverage alcohol are manifold and complex. While companies are trying to keep up with sudden spikes in demand as consumers stock up, the picture is highly varied.

The investment analyst reports that the lockdown during St. Patrick’s Day celebrations severely impacted sales of several brand lines of Irish whiskey in the US during what is normally a peak period. ‘As such, I understand that in May and June, they don’t expect any additional purchases as they work through what’s already there,’ he says.

There are also concerns that, with bottling lines and factories in Europe shut down or working well below full capacity, companies may struggle to supply markets such as China as they emerge from the worst of the crisis. Smith points out the potential opportunity for local suppliers. He notes, “there will be real pressure on markets and it may push people back to local suppliers, but it will likely be a short-term change.”

In markets where big companies have pushed additional stock into the supply chain to hit their annual targets, suggests Smith, the crisis may serve to ‘clear out’ bloated inventories.

With flights grounded and airlines struggling, the immediate impact on travel retail is almost as sudden and severe as that on the on-trade. But what happens when travel restrictions are lifted?

‘People are saying that there will be fewer planes flying around after this,’ says the investment analyst. ‘And people are becoming accustomed to doing staff conference calls by Zoom, rather than flying in for one meeting. If travel is reduced, travel retail will be too.’

According to IWSR data, the channel accounts for between 5% and 10% for several large global spirits brand owners, implying that any prolonged downturn could have a longer-term impact on sales.

This is potentially a more serious long-term adjustment, as airlines go out of business, slim down their fleets and reduce the number of flights – particularly if a deep economic downturn and changes in consumer behaviour reduce demand. “A key question is whether people will still choose to travel as much as they did prior to the pandemic, especially after seeing the drastic reduction in emission levels through COVID-19,” remarks Meek.