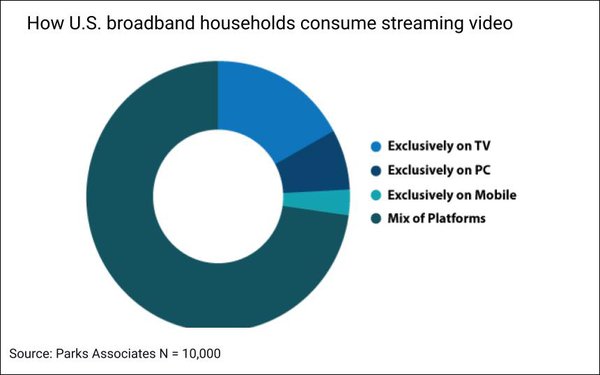 Nearly 70% of U.S. broadband households own at least one connected streaming video device, 72% are engaging in multiplatform streaming video viewing, and 40% are viewing on all platforms available to them.

That’s according to a new whitepaper from Parks Associates and Bitmovin. Parks conducts quarterly surveys of 10,000 broadband households.

Ownership of smart TVs and streaming media players continues to rise, and after several years of declines, gaming console ownership has stabilized, the research shows.

More than half (56%) of U.S. broadband households now own a smart TV, and more than half say that the smart TV is the device they use most frequently to watch streaming video.

The video developer community is seeing similar growth in their applications targeting multiple platforms, with OTT services supporting 10% more devices than they did in 2020, according to James Varndell, senior product manager for Bitmovin Player.

Parks’ latest survey also finds broadband households now averaging a surprising 14.5 connected devices — when all smart devices, including those for health monitoring, as well as computing, mobile, smart speaker and entertainment, are included. That’s up from 9.6 found in 2017. 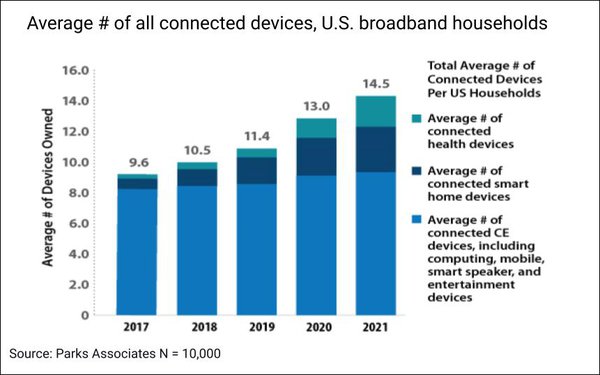 On the entertainment front, 41% have a streaming media player, and 38% have a gaming console.

In addition, 36% subscribe to or are trialing a video gaming service, and 31% (more than 30 million households) report using free, ad-supported streaming services.

“Consumers are watching streamed video content on multiple devices in the home, and increasingly from multiple services,” sums up Paul Erickson, director of research for Parks.

While consumer adoption of multiple streaming video services may slow, “their comfort with streaming content will persist,” he adds. “The connected home is now permanently a multiplatform environment.”